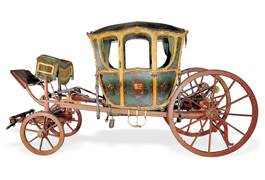 Ceremonial vehicle. In the second half of the 17th century, in Berlin, in the reign of Frederic William, a new model of vehicle emerged designed by Berlin. The body was suspended on two strong leather straps stretched lengthwise by means of a cric, a rolling mechanism, with a hatchet break inserted in the rear set of wheels. This type of vehicle is faster and safer than a coach. In Portugal, it was only used by the Royal House in the early 18th century. 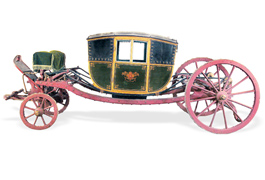 Is a private closed vehicle for travelling, in which both, or one of the seats fold back so that it can be used as a bed. 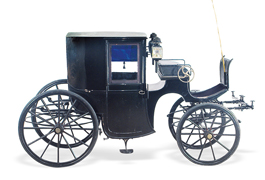 The vehicle is named after its English builder Lord Brougham (1839). In France this model also became known as Fiacre because it could be rented in Paris on the streets of Saint-Fiacre and Saint-Martin. It is a city vehicle used in the winter. It is light with four wheels and with two seats. Its body is closed and is connected the footrest and has doors, windows that lower and curtains or shutters for the passenger’s added privacy. To increase transport capacity, a new model was created with round bodied front allowing for an extra seat inside. 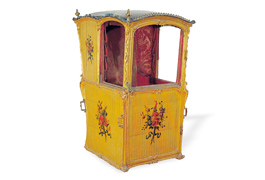 Urban transport vehicle without wheels. Two or four footmen, with the help of leather straps suspended from their shoulders, using two removable shafts fixed onto two lateral metal supports, carried it. It was used primarily by ladies or members of the clergy and also for transportation of sick people or pregnant women. The Sedan Chairs were also part of processions, transporting members of the clergy. They were used from the 17th to the 19th century. 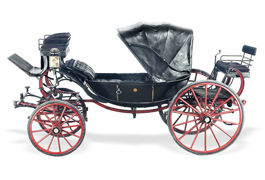 These types of cars emerged between the 17th and the 19th century in Germany and Poland. In Portuguese the name derives from the Polish word kolaska. It has two seats and a long curved body shaped like a canoe with two main seats, and an additional two seats in the front. For the safety of the passengers, the body has side panels and a door. It has a hood that can be folded back or pulled over to cover the front part of the body.