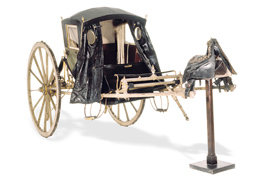 Half body, two-seat vehicle which emerged in Germany in the 17th century with the name Chaise which in Portugal became Sege. The wheels are connected by two shafts from which hang a stirrup to enter the Chaise. The body is set on two leather straps, just like the Berlin. It could be driven by a postillion, an aide to the coachman who rode on horseback next to the chaise holding the reigns. The four-wheel Chaise was also known as a “traquitana”. This type of vehicle became very popular and became a rental vehicle in and out of the cities in the 17th century and the 19th century. 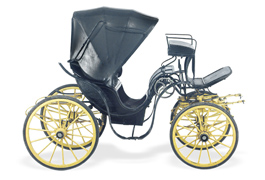 Two-passenger vehicle with an open body and folding hood to be used in good weather. The vehicle was named in England in the 19th century in honour of Queen Victoria. It is similar to the MILORD but the coachman’s seat can be removed it can be driven by the passenger. For this purpose, next to the interior seat there is a break and a bell.