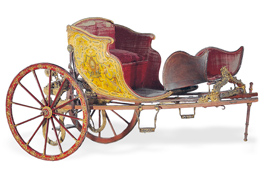 Promenade vehicle of Italian origin reaching its pinnacle in the 18th century. It was used by the Royal Family in their estates in Queluz, Mafra and Lisbon and was especially attractive to the young princes and princesses. Its body is open, except for at the front, which had a leather panel, used as a door, and has two seats. There is a seat for the groom at the rear end of the car. For the safety of the passengers, it was driven by an outrider. There are two wooden arcs extending downward from the wheel axles, which served as shock absorbers in the event that one of the wheels should come loose.

Carriages originated in England (18th century). During the first half of the 19th century, English technique replaces the influence of the French on the construction of vehicles for the Royal House and the Portuguese nobility, because orders became hard to fulfil due to the instability lived in France caused by the Revolution in 1798. Raising the coachman’s seat in Carriages increased driving safety; the introduction of lanterns improves visibility and greater comfort is achieved with the new suspension system for the body, comprising short straps and C-shaped steel springs. 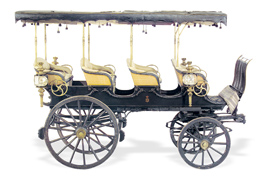 This type of car was born in France during the first half of the 19th century. It is a promenade vehicle, or hunting vehicle, used for small excursions or to bring along guests to hunting expeditions who did not ride. It is long with an open body and three seats, each seating three people. The doors are on the side and the third seat was a folding seat, to allow people to reach the back. 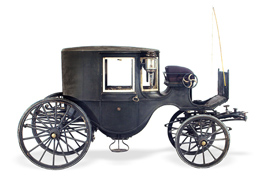 The name of this vehicle comes from the Duke of Clarence, who under the name William IV was King of England in the 19th century. The structure of this vehicle is similar to that of the Berlin, but the front of the body was replaced with rectangular or round windows, making its appearance lighter. The frugal aspect of the body contrasts with the exuberance of the interior decoration comprised of luxurious materials for the blinds and seats. 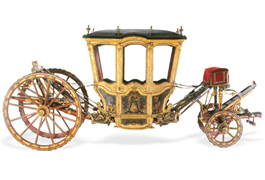 Ceremonial vehicle for travelling which emerged in Hungary in the mid 15th century in a location named Kocs, which is where the name comes from. The use of the coach became the most important expression of aristocratic power. The body was suspended on leather straps, from a mounting structure affixed to the wheel axels. In the mid 17th century, safety, comfort and driving of coaches improves as a number of introductions are made: the connection of the wheel axle to the rod with two iron arches that resemble a swan’s neck, the suspension springs, and, what became known as the fifth wheel – a mechanism incorporated in the front wheel set, underneath the coachman’s seat, made out of two superimposed circular parts, improving manoeuvring of the Coach. It was used between the 15th century and the 18th century.